Fee Reega is a german singer-/ songwriter who started her career in Berlin and went to Spain later. Her last record „ Te he amado en un hotel en la Calle del Divino Pastor“ was released in 2011 by the spanish label „Piovra Recordings in Madrid, the four other EPs in german language were released on „Woodland Recordings“, a british label based in Berlin.

She gave name to the genre „Problem Folk“ and is collaborating constantly with other artists belonging to the problematic and psychedelic folk scene.

Quite recently Fee Reega moved to a village in Asturias to write, record and clean the chimney. In May 2012 she will release her first LP, in three editions, in three languages (english, spanish, german) on different labels.

“Pablo Und Destruktion” is born as an evolution of Silencio Oso, the previous project of Pablo G.Diaz, as well as Arroz and Dandy Dada. Sincere songs, lights, echos and drills that perforate love, war and extreme feelings. Pablo executes a weird folk, mysterious and psychedelic, which he accompanies by dances and painting which convert the concerts in strange and unpredictable rituals.

This summer I went to Berlin to live there with the love of my life. I lasted eleven days. A very strange thing happened to me, my pupils were expanded from anger. I made this song in Gijón, showered and stry, but the video is a documentary of the proper thunder I had inside, especially as Daniel Goldmann (drummer of Silencio Oso) was present in the whole process. We recorded the first part in Berlin and the end in Gijón. It´s my first asturpsicodelich song. For now it is my hit within villagers and illegal immigrants. Link to the video 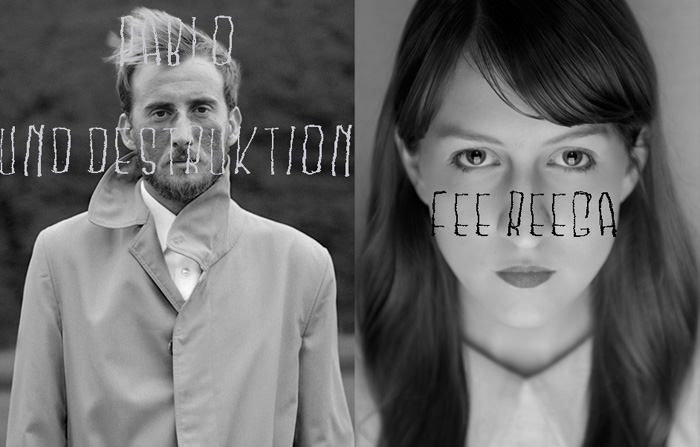